The Profound Simplicity of Being Nice 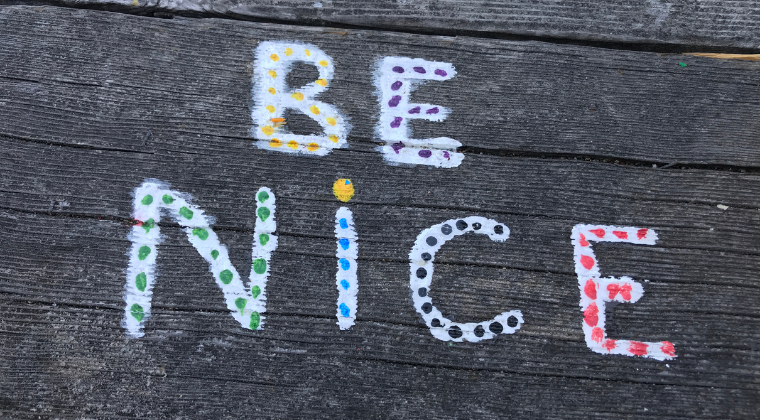 West Texas is comprised of long stretches of desert broken only by oil or cotton fields. The land is harsh and unforgiving. The temperatures are extreme and the heat can be almost unimaginable. And even though there is a lot of oil in West Texas, most of us lived in families that worked in the oil fields for nominal wages. It was a hard life in many respects, because the work was hard and the financial rewards were minimal. But West Texas had and continues to have something very special. In fact, it has something that I wish would spread across the rest of Texas and then onto the rest of the country.

What is it that West Texas has, besides rattle snakes and armadillos? It has nice people.

Growing up in West Texas I learned that if you saw someone with a flat tire on the side of the road, the proper thing to do was to pull over and volunteer to help. If you saw someone walking towards a door that you were near, you opened it and held it for them. If someone of a similar or older age asked a question you responded with a “sir” or a “ma’am”. You didn’t do it out of subservience. You did it to be nice.

I had the real privilege of spending time with quite a few educators and administrators in Miami this past week. These educators are a part of one of the largest school district in the country. The Miami-Dade School District boasts more schools and a larger budget than many of our smaller states. This behemoth of a district has opportunities and issues very unique to a large urban district that is in one of the true melting pot areas of our country.

I was in Miami because I was speaking to folks and training them on behavioral techniques, and specifically on Leaps. Through multiple sessions I would ask what the common issues are that they all deal with, and I heard the same responses that I hear across the country. My students don’t listen… Parents don’t support us… I don’t have enough time… I don’t have enough resources. These are the same laments I hear in the biggest districts in the large cities and in the small districts in the small towns. These problems transcend size and resources and are common for all educators.

But as I was listening to the educators telling me about their daily trials, one said something that really struck me. She simply said: We just need our kids and our teachers to remember what it meant to be nice. Nice is a simple sounding concept and in fact it’s a pejorative in some athletic circles that deride niceness as term of weakness. But that wasn’t the nice she was speaking of.

This is simply too simple to mean anything. But the more I thought about it, the more I realized how this simple little thought of hers was not only profound but was also prophetic. If you notice, she wasn’t lamenting the fact that kids today don’t have manners and don’t talk respectfully and don’t pay attention. Instead, she said that our kids, and ourselves, need to be nice.

Before I go any further, let me give a little honest disclosure. I am a very courteous person. I respond with a sir or a ma’am. I hold the door open. I make sure that the ladies walk through the door before me or my son. I put effort into being mannerly and courteous. But nice is a little outside my comfort zone. I am nice to people I know, but I am not an extrovert. I am not a “people person”. I do not want to strike up a conversation with a stranger, and I think because of this I have not put effort into being nice. Just simply being nice.

And do you know what happened?

I did not have to call their group to order.

I did not have to ask them to be quiet so we could begin.

I did not have to ask them to turn their phones off so that it wouldn’t interrupt our session. Something rather remarkable happened in that group. I was intentionally nice to them, and they in return were unintentionally nice in response. I heard people answering questions with more “sirs” and “thank yous” than in all the previous sessions combined. I had people being more attentive and showing appreciation for what was being said than in any other session. I had more thank yous and handshakes at the end than in any other session.

Something profoundly simple yet simply profound occurred. A little effort spent being nice was repaid with lots of niceness in return.

I know that being nice will not cure the ills of the classroom or make all our kids act like little angels. I know that purposeful niceness will not always be repaid with niceness. But I did find that as I put effort into being nice I not only received niceness in return, I was more attentive to and more invested in the people I was being nice to. In other words, me being nice to other people made those other people more important to me.

Let me challenge you to try something: As simple as it sounds, put real effort into being nice to your students, your family, your friends, and your coworkers. Give it a try. Intentionally let someone else walk through the door first. Intentionally hold the door open. Intentionally smile and make someone else feel welcomed and important. See what this small investment buys you.

One of the truths about behaviors is that they have to be learned, practiced, enforced, and imprinted actively. They have to be seen and tried. Give being nice a try and see what happens. It is so simple that it might just be the difference maker you have been looking for.